With a growing number of countries reporting new cases of the coronavirus, the obvious spread of this dreaded virus prompted a massive panic sell-off, the likes of which haven't been seen since 2008. Investors' fears of widespread economic tumult caused by the coronavirus were too much to ignore, despite last Friday's statement from Fed chairman Jerome Powell that the central bank was prepared to cut rates if necessary when it meets in March. Crude oil prices fell by over $6 per barrel since the end of January. The 10-year Treasury note fell to a record low as money flowed into long-term bonds, pushing prices higher and yields lower.

By the close of trading on the last day of February, each of the benchmark indexes listed here sustained major losses, led by the Dow, which fell by more than 10.0%. The small-cap Russell 2000 dropped more than 8.50% for the month, followed by the S&P 500, the Global Dow, and the tech stocks of the Nasdaq. Year-to-date gains achieved in January and the first part of February were wiped out, with three of the benchmark indexes listed here trailing their 2019 closing values by double digits. The Russell 2000 fell by nearly 12.0%, followed by the Dow and the Global Dow, which lost close to 11.0%, respectively. 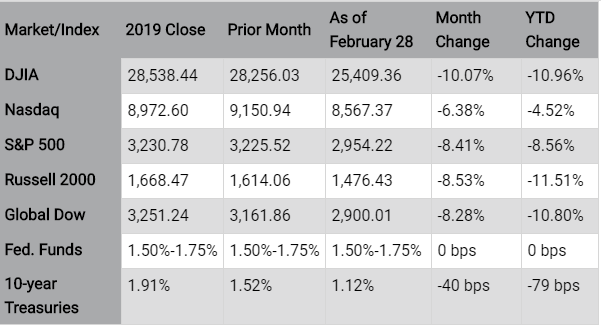 Chart reflects price changes, not total return. Because it does not include dividends or splits, it should not be used to benchmark performance of specific investments.

Eye on the Month Ahead

The impact of the coronavirus has been reflected in some economic reports and definitely in the stock market. March marks the first meeting of the Federal Open Market Committee since the end of January. Interest rates were unchanged at that time,. However, the Fed has stated a willingness to cut rates if necessary due to the economic tumult caused by the coronavirus.

Data sources: Economic: Based on data from U.S. Bureau of Labor Statistics (unemployment, inflation); U.S. Department of Commerce (GDP, corporate profits, retail sales, housing); S&P/Case-Shiller 20-City Composite Index (home prices); Institute for Supply Management (manufacturing/services). Performance: Based on data reported in WSJ Market Data Center (indexes); U.S. Treasury (Treasury yields); U.S. Energy Information Administration/Bloomberg.com Market Data (oil spot price, WTI Cushing, OK); www.goldprice.org (spot gold/silver); Oanda/FX Street (currency exchange rates). News items are based on reports from multiple commonly available international news sources (i.e. wire services) and are independently verified when necessary with secondary sources such as government agencies, corporate press releases, or trade organizations. All information is based on sources deemed reliable, but no warranty or guarantee is made as to its accuracy or completeness. Neither the information nor any opinion expressed herein constitutes a solicitation for the purchase or sale of any securities, and should not be relied on as financial advice. Past performance is no guarantee of future results. All investing involves risk, including the potential loss of principal, and there can be no guarantee that any investing strategy will be successful.